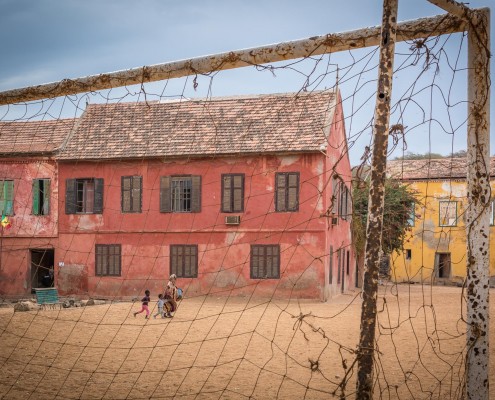 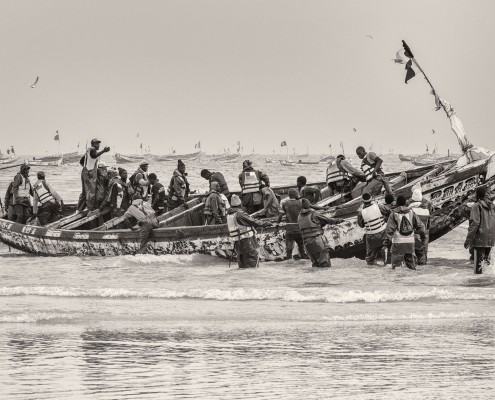 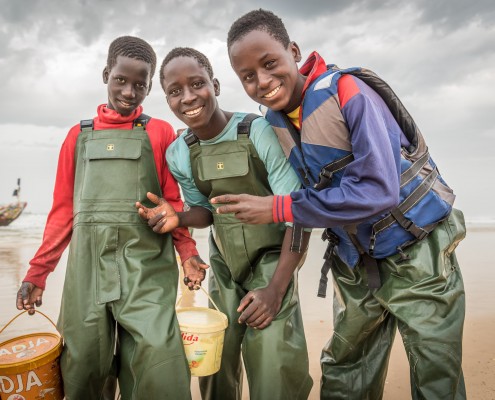 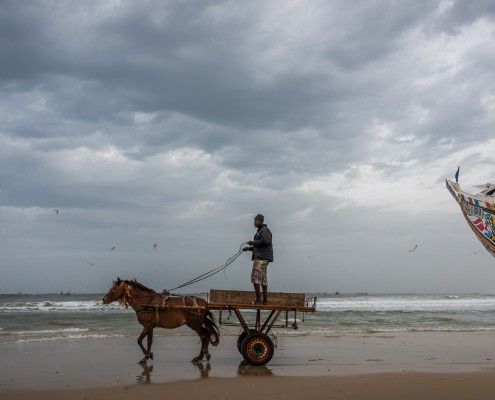 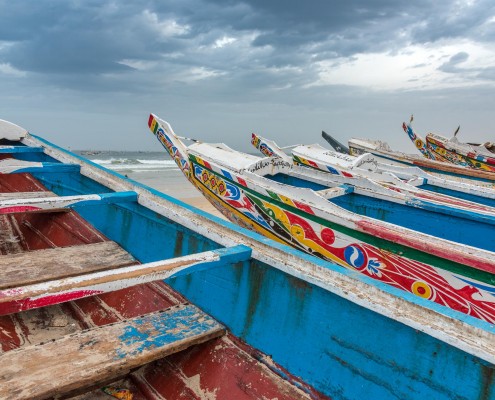 12th February – Dakar
Welcome to Senegal! Visit to the lively capital Dakar which is the center of political, artistic and intellectual “renouveau” since independence time. Visit of the “Plateau” district, the Governor Palace and some interesting markets as Kermel built in pure colonial style. Stop for lunch in a typical restaurant (optional).
Dinner in the hotel. (Hotel Djoloff 3* or similar)

13th February – Island of Gorèe
By ferryboat we reach the charming Island of Gorèe, Unesco World Heritage site. Walking in Gorèe is a pleasure, take your time strolling through the tiny stone paved alleys of the historical settlement among pastel facades, baobab trees, flowering gardens, art galeries and colonial buildings. But the history of Gorée is less bright: slaves used to be crammed and then shipped to the Americas. The town is totally restored to bear witness of those ancient times, however thanks to the nice breeze, the ancient architecture, the many restaurants and boutiques; Gorèe today has become a very pleasant and trendy location. Especially the sunset offers beautiful occasions for great pictures.
(hotel Municipal or similar, dinner in a restaurant)

14th February. Lac Rose – Kayar
Back to Dakar we drive to Lac Rose, a shallow saltwater lake surrounded by dunes. The water is ten times saltier than in the ocean and thanks to the high concentration the lake often shimmers pink. More than 600 workers here collect salt in the traditional way. On the coast we visit the largest fishermen’s village of Senegal, more than 4500 wooden painted pirogues come to the shore everyday with their catch. We will witness fishermen selling their catch to the local market women, meet artisans craving the large pirogues and painters decorating them with bright colors. Overnight near to the Lac Rose in the hotel Trarza (or similar), dinner included

15th February: Saint-Louis – Unesco World Heritage site
Saint Louis is a charming old town on an island between the Senegal river and the ocean. It was the first capital of West Africa French colonies. The best way to visit the narrow streets of the town is by calash, as locals do, and walk in the fisherman quarters. You’ll have
time to stroll and enjoy the unique atmosphere of this old town with its beautiful colonial buildings. We will spend the night in a historic hotel of the town – built in 1895 and now fully renovated – it was here that all Aeropostale pilots used to stay.
Hotel de la Poste, dinner included

16th February. Fulani People
We procede our journey to the Ferlo Desert to discover the arid region where nomadic Fulani tribes herds large droves of zebu. The Fulani (also called Peulh) are the largest tribe roaming West Africa’s savannahs, living in a vast area from Senegal to Chad. Their origins are still covered with mystery but they all share a common and aristocratic cult for beauty and elegance. In the afternoon a local guide will join us for a visit to the neighboring villages and shelters. When the herds come back, we might even be invited to witness the milking process. Ecolodge Koba, a camp made of very simple grass huts, managed by a local entrepreneur (all rooms with beds, mosquito nets, en-suite).

17th February. Joalh Fadiout & Delta Sine Saloum (Unesco World Heritage)
We stop in Joal-Fadiouth, two villages connected by a bridge. Of special interest in Fadiouth is the fact that is has been buildt on sea shells, that are also used for the construction of the buildings and decoration. Even the cemetery is located on one of the islands made of sea shells and surprisingly has both Muslim and Christian tombs next to each other. In the afternoon we reach the area of the Sine Saloum Delta and in the evening we will be spectators of the popular Senegalese wrestling show. This sport is a type of folk wrestling traditionally performed by the Serer people and now a national sport in Senegal and parts of The Gambia.
Overnight in the Eco Lodge Simal (or similar), dinner included 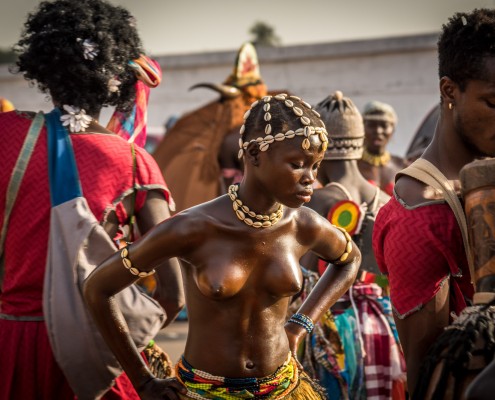 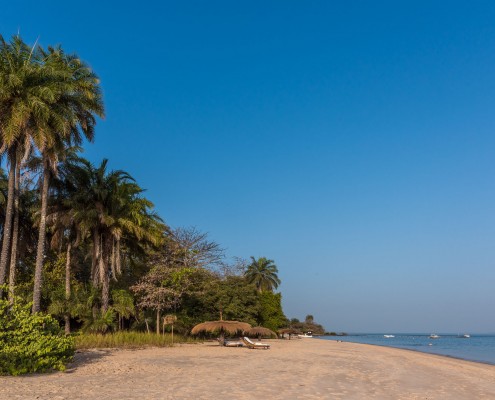 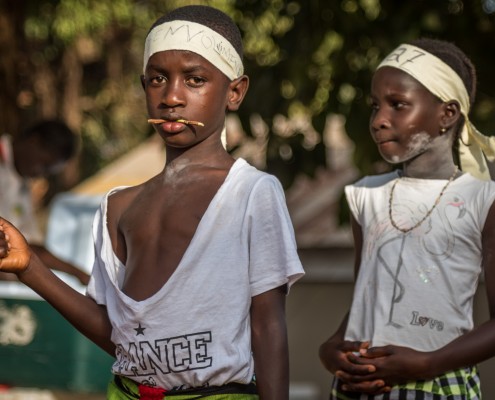 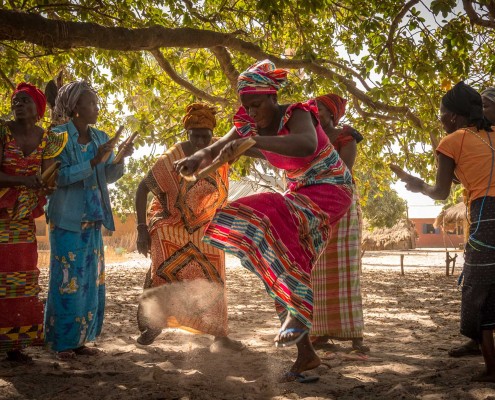 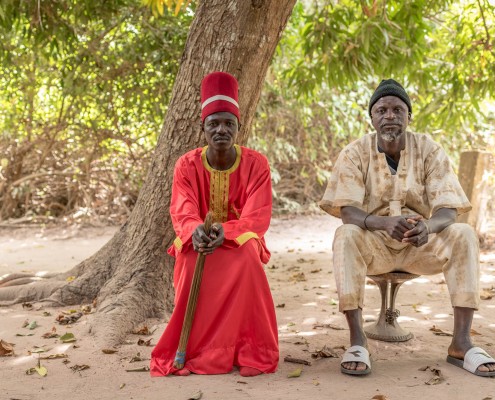 18th February Delta Sine Saloum
A day to explore the Delta, walk in the villages, make a short boat ride or just relax at the beautiful lodge.
Overnight in the Eco Lodge Simal, dinner included.

19th February: Sine Saloum – senegambian Stone Circles – Ziguinchor
After witnessing the sunrise in the Delta we drive to Sine Ngayene to see the famous Stone Circles, a UNESCO World Heritage Site which consists of 52 circles of standing stones, including one double circle. In all, there are 1102 carved stones on the site. Around 1km to the east, (outside the inscribed property) is the quarry from which the monoliths were extracted and where the sources of around 150 stones can be traced. The site was excavated around 1970. The work established that the single burials appeared to precede in time the multiple burials associated with the stone circles. After we cross the Gambia river and proceed to Ziguinchor, the capital of the Casamance.
Hotel Kadjiandumaine or similar, including dinner.

20th February – the Casamance and the Diola People
Leaving the main road of Casamance we will visit an adobe-fortified building still inhabited by a large patriarchal Diola family, a very interesting example of traditional African “sculptural architecture”. These fortified houses, where light comes from a central hole in the roof, are known as “impluvium houses” and had the function to protect its dwellers from attacks. Afterwards we will be received by the king of a Diola Kingdom. After the ufficial salutations the king, who is also the high priest holding both political and mystical power, will answer our questions about the traditional rules in Diola society. Later, we will attend a mask performance. These masks leave the sacred forest to dance for an enthusiastic local crowd. Masks are part of the animistic Diola culture and Malinka traditions – people fear and respect masks, considering them spirits who play an important role in solving conflicts between villagers. Overnight in Ziguinchor.

21st February Entering Guinea Bissau and the Felupe people
Early departure. After crossing the border to Guinea Bissau we will leave the main road for a hike. We will walk in a unique landscape of streams, salt swamps, flat lands and rice farms. In this remote environment, some gigantic Kapok and Baobab trees give shade to tiny human settlements of Felupes. These people live in an isolated and flooded ecosystem where they farm rice thanks to a complex “tribal technology” to desalinate the soil. People live in adobe huts built in a unique architectural style: clay “buildings” surrounded by a shady veranda and covered with large and tall thatch roofs with garrets for the aeration. With luck we will be able to witness some special dancing performances of the Felupe people. Overnight in Bissao, Hotel Azalai or similar.

22nd February: The Bijagos Islands
We explore the magic archipelago of the Bijagos islands starting with Bolama, the former capital. After the Portuguese left, native people came to live in this town which is now falling apart, partly invaded by tropical vegetation. It was built following the plans of a «Castrum
Romanae» but today we find large sunny and lethargic avenues, empty squares, dry fountains, bush-like gardens. In the Governor’s Palace we can still see the classic columns now surrounded by grazing goats. Although inhabited, this capital town is now plunged in the
fairy-tale atmosphere of a ghost town. Arrival to Rubane island where we check in at the best lodge in the archipelago. Afternoon free to enjoy the sandy beach, the pool or discover the island with a local guide. Dinner included.

23rd February – Bijagos Islands:
Morning visit of Soga Island. Due to the remoteness, the lack of transports and the deep attachment of the locals to their traditions, the Bijagos tribes have been little influenced by the external world. Life in the villages is characterized by initiations, rites, and secret ceremonies. In some villages, the young men go through a seven-year initiation rite in a “convent” with no contact with women. With its wild and idyllic landscapes and genuine tribal culture, the Bijagos Archipelago is a “geographical jewel”. Life is still ruled by the “cycle of seasons”. During the long dry season, when harvest is over, the main ceremonies take place. We will see if there is any special event going on during our visit on one of the islands. Lodge and dinner.

24th February – Carnival in Bissau
Speedboat ride back to the capital Bissau in time for witnessing the colorful Carnival procession in the afternoon. The trip ends with the airport transfer after the procession in the evening about 6 pm. 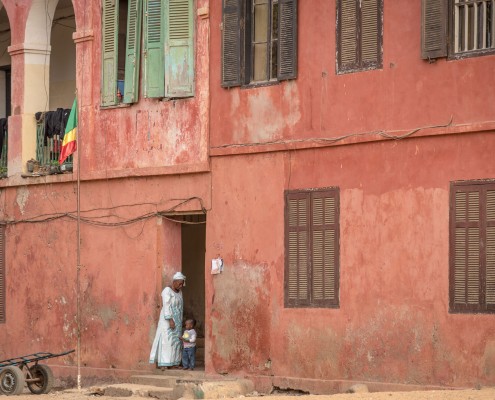 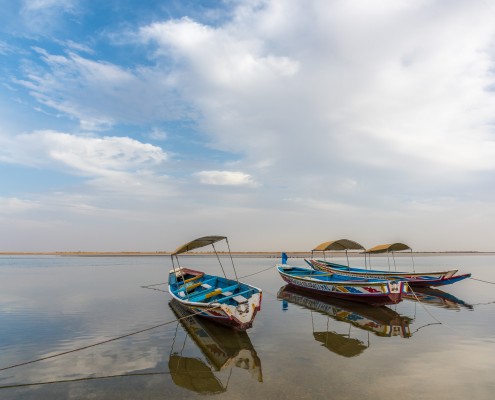 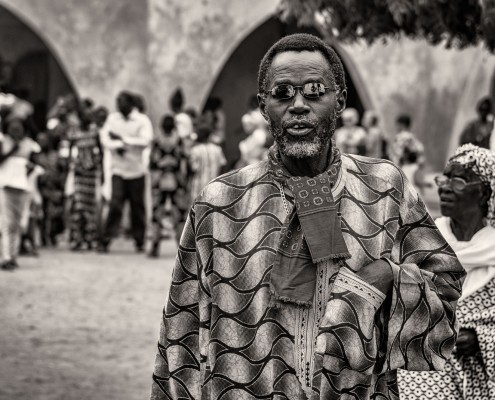 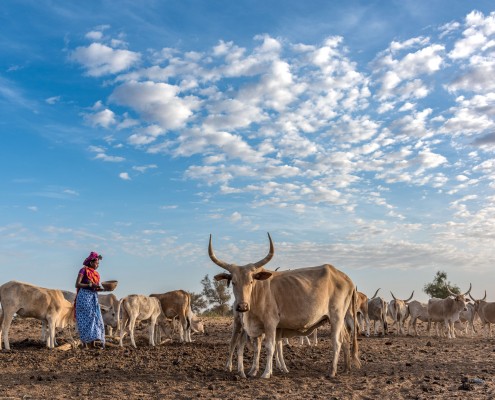 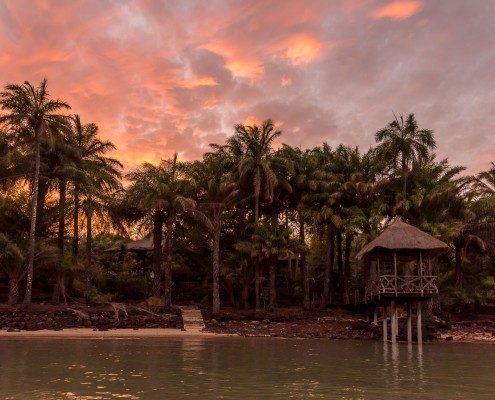 INCLUDES:
Professional travel photographer. Expert local guides and drivers for all activities. Accommodation on a dbl shared basis in standard rooms in very varied accommodations due to the local availability (some places with A/C, some with fan) as by description. Halfboard (continental breakfast and dinner). Tours and visits as per the program. Mineral water in the bus/car. Entrance fees to parks, concessions, protected areas and cultural sites. First Aid box. All service charges and taxes. Pass for Bissau Carnival

EXCLUDES:
Any flights and airport taxes. Visa fees. Items of a personal nature. Earlier (prior day 1) and/or later (after day 12) transfers from and to airport. Lunches. Drinks, entrance fees, porterage. Tours/excursions and transfers not specified above. Cancellation, baggage and medical insurance (compulsory!). Personal photographic permissions. Any new government taxes, levies, fuel or industry increases which are beyond our control. Tips. Every other thing not mentioned under “included services”.

book or request now
for more photos visit the gallery!